Zamdela a pollution hotspot: No hope for women living in mining-affected communities

ZAMDELA, SASOLBURG: An unpleasant smell from the air has become a norm for the residents of Zamdela, a small township in Free State, Sasolburg, located near one of the largest coal-producing plants in Africa.

For many years they have been living with the consequences of high carbon emissions from Sasol’s coal power plant.

The climate change risk and challenges posed by these daily experiences put a lot of strain on many women in the community and has devastating health impact. Water scarcity is not only a crisis but the rare liquid is contaminated with what is believed to be toxic mining residue.

Both community and climate change activists in Zamdela claim that Sasol uses a lot of water in their daily operations which in the long run affects the surrounding communities. Often mining operations result in underground water being polluted. This means that communities end up without water for their daily activities and it becomes unhealthy for their use.

South Africa is the highest carbon emitter in Africa, and according to the Global Carbon Atlas, it is the 13th biggest CO2 polluter. Coal power currently accounts for 90% of the country’s electricity and is the single largest contributor to climate change.

Kido Mafisa, a climate change activist and a member of the Zamdela Air Quality Monitoring Committee (ZAQMC) highlighted the failures by both Sasol and the government to have a dialogue on how to mitigate pollutions issues that are affecting not only women but the community at large.

Mafisa indicated the existence of a legal battle between the community of Zamdela and Sasol dating back to 1998, 2004 and 2014 and the courts always ruled in favour of the community. Despite these victories, Sasol is still not complying.

“Every time we take Sasol to court, they agree to comply, only to realize that they continue operations in the early hours of the morning when everyone is asleep” Mafisa explained.

No joy for Zamdela women?

This is not the only recurring issue, as women have permanently been excluded from the mining industry and the decision-making processes in mining communities.

This was indicated by Mining Affected Communities United in Action (MACUA) in their recent social audit which shows a lack of participation of women in consultations undertaken by mining companies.

Mafisa further explained that through ZAQMC their call to action is to invite Sasol to come into the community and listen to the concerns raised by women.

“We want to make them aware that by using contaminated water, we are suffering from long terms effects, we have witnessed many cases where pregnant women are giving birth to deformed infants, or with skin rash, eye infections and respiratory problems. We believe that all these effects are caused by Particular Matter (PM) 2 if not PM 2.5 that Sasol emits” Mafisa said.

A 2017 study, commissioned by groundWork, estimated that deaths of 2239 people per year could be attributed to coal-related air pollution in South Africa, as well as more than 9500 cases of bronchitis among children 6 to 12.

“South Africa is the 7th biggest coal producer in the world, and its continued use of coal contributes to the release of toxins and pollutants which has had an impact on our health,” said Leleti Maluleke, a researcher for Human Security and Climate Change programme at Good Governance Africa.

In response, Sasol said that even though they acknowledge the impacts of their operations they are committed to alleviating the effects.

“We recognize and understand the environmental footprint associated with our activities and responsibly manage these in a prudent and legally compliant way. Our actions aim to ensure that safety, health and environment (SHE) is a top priority. Additionally, our SHE Policy commits us to responsibly address our environmental challenges with consideration for the interests of our stakeholders,” said Sasol in a statement.

“Sasol is dependent on natural resources including coal, crude oil, natural gas and water for our business activities. Our activities, by their very nature, have an unavoidable impact on the environment; and we remain committed to minimising these impacts,” added Sasol.

It is further alleged that when Sasol comes to the community to engage with them, the company tends to mislead the community to sign an attendance register, and in turn, use their signatures to acquire polluting licences.

“When asked if they got permission to pollute from the Zamdela community, they say yes and they produce a proof of a register with our signatures, and by doing so, defeats this whole purpose of advocating for what we believe is the abuse of our human rights” explained Mafisa.

Matshidiso Tsvinyane, an unemployed mother, activist, and also a member of ZAQMC, said that despite the challenges women of Zamdela face, they will continue fighting for climate justice.

“As women, we are the most vulnerable in Zamdela. We are the caregivers and this water issue poses a health threat. Our only solution is to boil or pour vinegar into the water before use,” said Tsvinyane.

ZAQMC as a forum believes that the ongoing water cuts and shortages are caused by the diversion of water by Sasol, and without a doubt claims that Sasol gets clean water to pollute whereas communities around the mine are struggling. Rumour has it that Sasol is opening a Green Hydrogen Plant along N1 between Sasolburg and Johannesburg., and fears are that, more water will be diverted from the community to the plant, and an increase in pollution.

“We cannot expect people to support a transition to green energy if it is not ‘just’ and does not address the challenges that many people face. It is important to address the grievances that individuals and communities have and encourage participation.” Maluleke said.

The Media Liason Officer at Mining Affected Communities United in Action (MACUA), Gilbert Moela said, “mining-affected communities bear the brunt of mining impacts that often threatens their environment, devastating health impact, poverty, unemployment, gender inequality and water scarcity. It should be a national disgrace, the severe impacts of mining and the resultant patterns of impoverishment experienced by mining-affected communities”.

Given the social impacts and environmental devastation that mining often results in, the right to free prior and informed consent is urgently required if the state hopes to address the injustices of the past and arrest the contemporary injustices faced by affected communities.

Beauty Jantjie, a resident in Zamdela whose livelihood is dependent on gardening and recycling said they have no hope for change since Sasol has been operating for years.

Jantjie mentioned that since unemployment is another challenge in Sasolburg, they have tried gardening as an option to sustain their everyday lives, but due to air and water pollution their plants are affected too.

“We have been given free space within the arts centre to do gardening and we have tried all sorts of ways to keep the soil fertile, but our plants keep on dying” explained Jantjie. 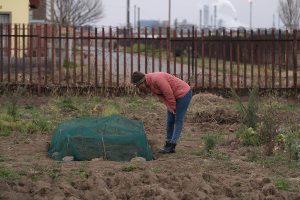 Mafisa added that they have consulted with their umbrella body Vaal Environmental Justice Alliance (VEJA) regarding the safety of the water. She added that regularly, they meet as Implementation Task Team and the polluters to try and understand who is responsible for polluting.

“When VEJA approached Sasol about these allegations, they point fingers either at other industrial companies or Metsimaholo Municipality for contaminating the water,” said Mafisa.

ZAQMC mentioned that VEJA once brought in a water expert to inspect the water. The community were presented with the results on the level of toxins in the water, the expert suggested that they boil the water before use.

The delay in finding solutions to end pollution in Zamdela is being withheld by what residents suspects is fueled by corruption and greediness amongst their community members.

“How can someone who was born and raised here in Sasolburg and now works as an Air Quality manager, seem to be clueless about what is happening within his own community?  Clearly, he is bribed by Sasol because when we raise concerns to him regarding water and air pollution, he doesn’t attempt to find the solutions to these challenges” said a resident who wanted to remain unknown.

Mafisa and other community members who have been living in Zamdela since 1977 have no hope for a better Zamdela and stressed that, there are no alternatives for income which in turn causes them to remain dependent on their male counterparts who are employed by the mine.

Sasol is the second-highest emitter of greenhouse gases in South Africa, contributing up to 15% of the country’s emissions.