Predicting a catastrophic moral failure and its heavy burden on the lives of people in the poorest countries, the World Health Organisation (WHO) declared a Vaccine Equity Declaration in 2021.

Aimed at accelerating the cushioning of the world against Covid-19 and also speeding up global recovery from the pandemic, the declaration set a target of 70% global vaccination coverage by mid-2022.

To enforce its efforts WHO, in collaboration with Gavi, CEPI and UNICEF set up the COVAX facility meant to ensure equitable distribution, manufacturing and access to vaccines.

This was also in line with the previously launched Access to COVID-19 Tools (ACT) Accelerator, which was a ground breaking global collaboration to accelerate development, production, and equitable access to COVID-19 tests, treatments, and vaccines.

With these in place, WHO believed they had the insurance that every country has equitable access to vaccines as soon as they were available.

African Union Special Envoy to the African Vaccine Acquisition Task Team, Strive Masiyiwa is on record condemning COVAX for being culpable of unfairness and highlighted that ‘despite the AU’s task team efforts to pay upfront for the vaccines, manufacturers told them the capacity for the whole of 2021 had already been bought.’

Besides the financial ability to procure vaccines, other external factors affected the procurement and distribution of vaccines.

According to the UNDP, “Access to and allocation of vaccines should be based on principles grounded in the right of every human to enjoy the highest attainable standard of health without distinction of race, religion, political belief, economic, or any other social condition.

Globally, the distribution of vaccines is shaped by challenging political, economic, social, diplomatic, and health-related matters.”

Despite setting the 70% target, in June 2022 only 30% of the WHO member states had achieved the target, translating to only 58 out of 194 member states. 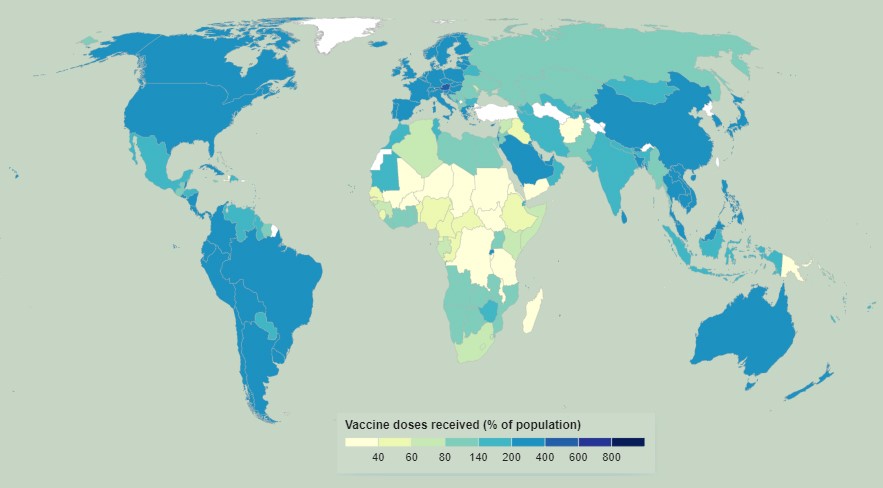 The only countries in African countries with enough doses to cover their entire population in Africa are Mauritius (301%) and Rwanda (209%).

Zimbabwe is amongst the strongest African nations, ranked 7th amongst the top vaccine procuring countries in Africa with enough doses to cover 140% of its population below Djibouti, Morroco and Mauritania respectively.

If everyone was going to be fully vaccinated today in Zimbabwe, the available vaccines would be able to cover 70% of the population.

Demand and uptake are getting lower and lower with data from least developed countries representing in-depth challenges.

According to the Africa Center for Disease Control (AfCDC), the government of Zimbabwe, through donations and self-procurement amassed around 22 478 800 doses.

Retired WHO Regional Advisor in Health Promotion and Social Determinants of Health, Professor Davison Munodawafa said there were various challenges to meeting the target.

“The target could not be realized for various reasons most of which are rooted in the existing weak health systems characterized by weak leadership, the weak human capacity to deliver services, weak infrastructures and competing needs among the general population such as addressing poverty or food scarcity versus seeking health services,” said Professor Munodawafa.

However, the National Covid-19 Chief Coordinator, Dr Agnes Mahomva painted a positive picture of the campaign.

“We knew 70% was an ambitious target, but we are moving very nicely and our coverage continues to increase. Zimbabweans are keen to get vaccinated. A survey that was done in September 2021 shows that over 72% were ready and willing to get vaccinated,” Mahomva said.

The vaccination campaign in the country has been slowly faltering, with fewer people turning over to get vaccinated. 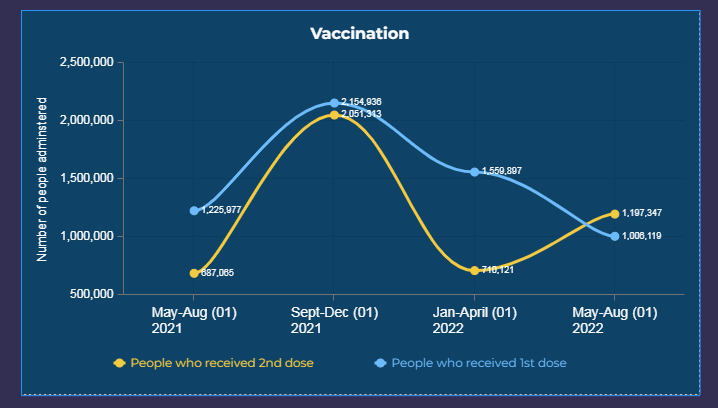 During the height of the pandemic and a tight lockdown last year, trends show people were getting vaccinated in numbers and also coming back for the second doses.

At some point, the country was short of resources to even effectively meet the demand at various vaccination points across the country.

However, during the start of 2022 number of people getting vaccinated dropped, a trend which experts attributed to complacency, a drop in the number of infections and the long-term effect of lack of information about the vaccines themselves.

“There is still resistance from the public and negative campaigns on social media which brought up speculated complications such as infertility. Citizens who did not believe in the vaccine still do not believe,” said Dr Josephat Chiripanyanga.

“Generally, people respond to fear. When the pandemic was at its height, a lot were vaccinated. Now that the pandemic is on the low side, the numbers of people getting jabs have subsided,” he added.

In response to the faltering campaign, the government widened the target population.

“The government has already approved vaccination of 12-year-olds and continues to explore other options of who else can be vaccinated. Phase 1 and 2 campaigns were introduced setting up points at shopping centres and markets,” said Mahomva

Some citizens feel that even though the extensive campaigns are good, the positioning sometimes raises questions.

“I was passing by Coppa Cabbana and a health practitioner was sitting under one of the trees administering jabs right there. For me, it raised a weird feeling given the environment that surrounded her. Would you get vaccinated there?” asked Edina Mukadi, a Harare resident.

A dose of reality on timing and supply

By the end of 2021, most first-world countries had already passed over 50% vaccination rates in the target population.

In Zimbabwe, the facility managed to deliver close to a million vaccines in late September 2021.

“Had African countries received vaccines earlier, the outcome would have been different. The delay created a window for unnecessary interrogation of vaccine efficacy and effectiveness as well as advancing conspiracy theories about vaccines.  The delay also created a situation where citizens started to doubt the seriousness and readiness of their governments to protect the population,” added Prof Munodawafa.

Questions are also being raised about the shelf life of the stocked-up vaccines as some may get expired along the way, further depriving people of the opportunity to get vaccinated.

In May 2021, Malawi destroyed close to 20 000 doses of AstraZeneca vaccines after they had received 102 000 jabs with a three-week grace period before the expiry date.

The Zimbabwean government however assured the citizens that the stockpiles of vaccines are safe.

“The vaccines will not expire on us as we keep a close eye.  At any point, if we think the dates are getting too tight on us, we will come up with strategies to make sure that they are utilized here or elsewhere in time,” said Mahomva.

Research shows that the Sinopharm and Sinovac vaccines have an extended shelf life of up to two years in refrigeration from the initial 12 months.

“About two weeks ago, the treasury released ZWL 500 million for the campaigns to continue to be ramped up. The government continues to push for innovative approaches,” pointed out Dr Mahomva.

The government has been urged to increase the cadence of their campaigns and also take this as a lesson for future use.

Transparency and proactive information disclosure on the choice of vaccines, components and processes is crucial to gaining people’s trust.

“The government should strengthen policy and strategies of vaccine uptake at individual, household and community levels. There should be concerted efforts to focus on risk communication and community engagement to fight misinformation, disinformation and fake news may be key,” said Prof Munodawafa.

According to the UNDP, urgent access to vaccines and financing s essential for the poorest countries, alongside support that is tailored to the situation faced by each nation.

The organisation further stated that if vaccine equity is not dealt with soon, the consequences could be grave.

Zamdela a pollution hotspot: No hope for women...