HARARE, ZIMBABWE: It is midday in Hwange, a town in west Zimbabwe. The sun is scorching, but Mildred Mangwana, 58, is not bothered by the high temperature as she stirs a dark-looking and offensive-smelling mixture in a 200-litre drum.

Mangwana’s piece of land is ready for cultivation ahead of the farming season, and this time, she will use this unlikely mixture to encircle her land to protect her crops from marauding elephants.

Since 1995, when she got married and moved with her husband to Siyalwindi village in Dete, a district nestled within the Hwange National Park, the farming season has always been full of hassle and anxiety as wandering elephants who tramp down their farmlands and homesteads are everywhere.

The Hwange National Park is located in a drought-prone part of Zimbabwe where lesser rainfall has been recorded. Farmers in the community only cultivate drought-resistant crops like millet, pumpkin, and watermelon which the elephants seem to take a liking to.

“We used to take turns [guarding] our fields day and night, so we could chase the elephants through using the old methods of beating drums and burning fire,” Mangwana told The SolutionsPaper 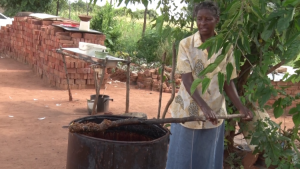 However, in 2016, a group called Tikobane Trust, which translates to ‘let us share’ started working with communities within Hwange, advocating for the safe and secure cohabitation with wild animals.

The Director of Tikobane Trust, Ndlelende Ncube said people in these communities have been neglected for so long and deemed as poachers, and people who are harming the environment.

Elaborating further on the plight of the Hwange communities who are cohabiting with elephants, he explained that a lot of elephants invade lands where people grow their crops, “but we want to protect our environment” Ncube, who is also a native of Hwange, told The SolutionsPaper.

“At some point, the elephants destroyed eight fields at once. Usually, one field can produce a yield of one to one and a half tonnes of food. If they [elephants] are left to wander around, the whole village will die of hunger or depend on donor aid.”

“With climate change, most of these fields don’t have much, but elephants destroy everything, leaving most with nothing. Some families end up resorting to crimes such as poaching to survive.”

In January 2021, Tikobane Trust introduced an organic elephant repellent as an alternative means to protect people’s farmlands and reduce antipathy between members of the community and wildlife within the park.

Data shows that elephants have keen smell-detecting capabilities which they use to perceive water sources that are up to 19.2 kilometres away. This fact influenced the creation of the repellent.

The repellent, which they refer to as Chilli, is a borrowed concept from Uganda. The mixture which contains garlic, ginger, chillies, and neem leaves is smoothly ground in a pestle and mortar, and boiled together before adding raw eggs and cattle dung.

It is then fermented for three weeks and poured into small bottles with holes that are stationed around fences surrounding the farmlands. Elephants can smell this mixture from a distance of 100 metres.

Ncube believes that the repellent is meant to protect both wildlife and humans. He told The SolutionsPaper that, “most of the elephants come from the forestry commissioned land as there is no fence. Ever since this repellent was put up, not even one elephant has entered the fields.”

“This repellent has been effective and was tried in Tanzania and Uganda. Our partners in Uganda, WildAid, supported us throughout this project, as a community-driven solution.”

He added that three elephants were shot in two months after they invaded an area, about five to six kilometres where there are no repellents, “this repellent not only saves crops, but the giant mammals [sic] from being shot.”

Hwange National Park is approximately 14,650 square kilometres. “Currently, we have managed to fence an area of 2.5 Km with the repellent and by end of the farming season, we target 23 Km. This can only be done if all stakeholders are on board.” 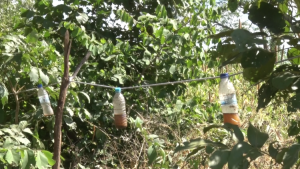 The repellent is also harmless to the elephants. The Chief Director of the Veterinary Services department at the Ministry of Lands, Agriculture, Fisheries, Water, Climate and Rural Development in Zimbabwe, Josphat Nyika, told The SolutionsPaper that the concoction is made of food items that are not harmful to the animals.

Nyika, however, noted that elephants do not like the chillies which are a prime ingredient of the repellent.

The cost of producing the mixture is quite expensive. For every 800 litres of repellent, 50 kg of chilies, 20 kg of ginger, and 20 kg of garlic are needed. Ncube explained that this is separate from the cost of the protective garment one wears to safeguard them from adverse skin effects that the Chilli could pose.

Zimbabwe, like other southern African countries, currently faces the hassle of managing the surge in the elephant population. Zimbabwe can only sustain 45,000 elephants, but the number has risen to over 100,000 resulting in an increased human-wildlife interface.

Data from the African Elephants Database shows that the Hwange National Park alone houses over 45,000 elephants.

A spokesperson for the Zimbabwe Park and Wildlife Management Authority (ZIMPARKS),  Tinashe Farawo, told The SolutionsPaper that the agency gets more than 2,000 distress calls across the country every year, “this year alone we are now past 1,200 calls that we have responded to, but it is not for elephants alone.”

And so, the increasing population of elephants and the rising cost of producing the Chilli repellent could mitigate efforts by both the Zimbabwean leaders and farmers who have adopted this strategy to protect their farmlands as opposed to other options which could exacerbate the indiscriminate killing of wildlife. 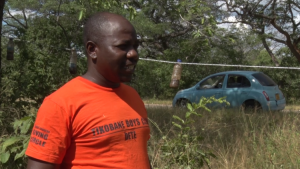 In addition, Ncube noted that the Chilli repellent, during the fermentation period, tends to attract insects, especially flies and mosquitoes which could exacerbate the spread of infectious diseases in the community.

“In the future, we look to grow some of these ingredients on our own once we get the knowledge so we try by all means to reduce the cost of production, the [neem] leaves can be collected in our bush where we get firewood,” Ncube told The SolutionsPaper.

Zamdela a pollution hotspot: No hope for women living in mining-affected communities

Zamdela a pollution hotspot: No hope for women...

Reopening of Mkoba maternity wing on the cards